"Friar," excerpt of the Betley Window 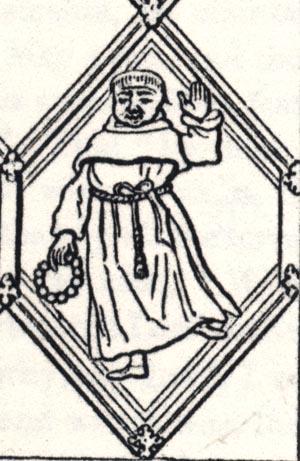 "Friar," excerpt of the Betley Window

Additional Information:
This image of the Friar comes from a rendering of the Betley Window (1621), a famous glass piece that depicts many figures from the morris dance tradition.  Several of the Betley images are slightly modified copies of engravings made originally by the German engraver Israel van Meckenhem (c. 1445-1503). But John Forrest argues in The History of Morris Dancing, 1458-1750 (Toronto: University of Toronto Press, 1999) that the Betley window's images contain distinctly English details, such as the friar. Furthermore, the friar figure (pictured here at left) is not present in the German fifteenth-century van Meckenhem originals (Forrest 155-56)