Robbins Library Digital Projects > Camelot Project > Pictures at Play, or, Dialogues of the Galleries by Two Art Critics > The Lady of Shalott
Back to top

The Lady of Shalott

The Lady of Shalott

The following dialogue is from Pictures at Play, an 1888 series of exchanges between contemporary paintings in a gallery. The preface explains: It is familiar to all that the old portraits in old houses habitually come out of their frames at night, and walk and talk. Every one knows this who has ever read a Christmas Number. But it may be less generally credited that the people in the new pictures, in the Academy and other galleries, have also their play-time, stroll about, and exchange their ideas about Art and Life.


(The curtain rises, and discovers THE LADY OF SHALOTT [500] by J. W. Waterhouse, A.R.A. Open-mouthed and suffering the last agonies of influenza, she is seen, against a background of realistic landscape, sitting in a boat, and in act to let go the painter thereof. The scene cannot possibly be Camelot, but might well be the Paris Salon.)

THE LADY OF SHALOTT (singing).
I am the Lady of Shalott,
And if you say you love me not,
I shall reply, I wis,
That Bastien-Lepage has been
Much marked of Waterhouse, I ween,
And the result is—this!
The A.R.A. who painted me
Is young and popular, and free
To gratify his whim;
Where on a couch of pain I lay,
He came and called me up one day,
And bade me follow him.
In strange attire he vestured me,
Yea, in the silks of Liberty,
He set me thus afloat;
He bade me seem to have the shakes,
And ope my mouth as one that takes
A high and hopeless note.
And painting merely what he saw,
According to the last-found law
Of values and of tones,
He made me, much to my amaze,
A thing whereon the public gaze,
And mock me for the nones.

I am the Lady of Shalott
And if you tell me I am not,
I say but this one thing:
That here be 'values' rare and quaint,
A goodly 'quality of paint,'
And 'workmanlike hand-ling.'

(She speaks.)
I am a seemly thing in my way, I wis; but they are few who stay to dote on me, and fewer still that come back. I marvel wherefore! Even the art-critics are not friendly to me. One there was, and to look at him he was a man of power; but he murmured vaguely of 'carnations,' and thereof have I no store, so he deemed me some light thing. There was another, too, and he considered me gravely, and with an intellectual gleam upon his marble brow; but all I gat from him was that he recognised me for the work of what he called 'an excessively rising young Associate.' My looks are strange, no doubt; but I trust I am no such matter. Then came a third, and he was eloquent of 'colour for colour's sake,' and 'resonant chords of pigment,' and 'the fundamental basis of paint'; also he was right well sure of everything, and talked of me as I had been the work of his own right hand; but in the main he liked me not, for that my 'tonality' is low, and I do not speak with a Scotch accent. And one there came to me as it might be casually and in a dream; and when he saw me he laughed and japed on me with his japes, and spake words of my Lord Tennyson, and therewith he fled from me as the light, romantic gazelle. Another watched me earnestly and long, and I saw that he loved me well and had plucked out the heart of my mystery; but his talk was of 'planes,' and of 'modelling,' and therewithal of 'square painting' and the 'aërial envelope,' and in my heart I feared that his remarks were not of those that are understanded of the people. And another came, and of many sought much councel and gat little, and was as one that comprehended not. Ah, 'tis a goodly gift and an imperishable, to be Right Art; but 'tis something to be a popular picture too. There is my poor friend Niobe, for instance—even the 'Niobe' (712) of Mr. Solomon J. Solomon. She is young to be the mother of seven; but she tells me that to be passed over, as she commonly is, for that Egyptian jest of Mr. Long's—a 'Jury of Matrons in the Olden Time' (453) is what she calls it—is ageing her perceptibly. I am not on speaking terms with the Frith in the First Gallery, but I hear from the Frank Dicksee hard by that he bitterly laments the dear dead days when it took the A Division in relays to cope with the enthusiasm of the public. Ah, that such a lot were mine! Therein were a destiny indeed!

(She sings.)
I am the Lady of Shalott,
And, though you recognise me not,
Denied it may not be
That I am of the things right good,
Albeit scantly understood,
In this Academee.

(She speaks.)
Here is my little friend the Dicksee in the First Gallery. I call him 'The Age of Innocence,' but I believe his real name is 'The Shadow on the Church,' or something of the kind. It sounds like a reference to Disestablishment, but it can hardly be that. Of course the little Dicksee is not of my monde, but he is well meant, and in his artless English way he is well done. Well, little Dicksee, and how are we to-day?

Enter 'WITHIN THE SHADOW OF THE CHURCH' (5), by Frank Dicksee, A.R.A.
(The picture represents a young mother and her offspring chasing butterflies, and watched, from the shadow of the church, by a young ecclesiastic, who, like the Cardinal known to Captain Sumph, regrets that he is not a family man.)

THE DICKSEE.
I want to ask you questions, please, and, please, I want you to answer them.

THE LADY OF SHALOTT.
Talk away, little Dicksee, talk away.

THE DICKSEE.
Why do you call me 'The Age of Innocence'?

THE LADY OF SHALOTT.
My dear little picture, only look at yourself. What are your components—the buxom young mother; the good, wistful young priest, regretting that he cannot join; the bonnie wee prattler of two summers; the butterflies symbolic of Life and Joy—what are they but so much innocence in paint? For fifty years or so these elements have been doing duty as the essentials of British Art; in all good faith you reproduce them over again; and you ask me if you are innocent! Innocent, indeed? There are more of the kind about, but I should say that (considering your years and opportunities) you are about as innocent as they make them.

THE LADY OF SHALOTT.
You are easily pleased.

THE DICKSEE.
No, but really! You don't know what I mean. I've been writing a ballade, you know, and I fancied, from what you said, that it was all wrong, and I find it's all right.

THE LADY OF SHALOTT.
A ballade? You?

THE DICKSEE.
Oh, it's all right. Anybody can write a ballade now. I know a fellow that makes 'em in his sleep. Will you let me read you mine? It's a first attempt, but I don't think it's very bad. 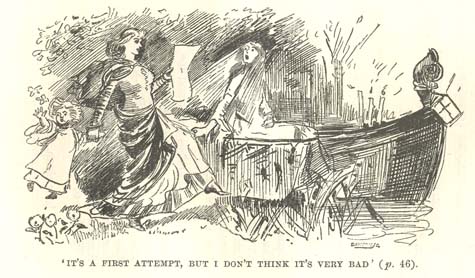 THE LADY OF SHALOTT (composing herself).
You won't mind if I close my eyes to listen? No? How sweet of you! Go on, little Dicksee, go on!

THE DICKSEE (reading).
BALLADE OF THE AGE OF INNOCENCE.
Come, cynic, come, and gaze with me,
This blithe and solemn First of May,
Upon these walls where, frank and free,
The brave Academicians play
At painting in the good old way;
And raise with me a counterblast
For them that swear by yea and nay
The Age of Innocence is past.

The 'flesh' of Ouless mark and see,
Observe the 'handling' of Millais,
Remark the Orchardsonian 'key,'
The 'sentiment' of Faed (R.A.),
The 'atmosphere' of Tadema,
Nor flee the Herberts far and fast,
And tell me, tell me not, I pray,
'The Age of Innocence is past!'

O clean, how clean, those warriors be
That Gilbert marshals for the fray!
What ardent types of purity
Doth Morris make his matrons! Yea,
And Cooper's green and Marks's gray
With Horsley's blue you shall contrast
Before you cry 'Ah welladay,
The Age of Innocence is passed!'

ENVOY.
Cynic, when Long shall cease to pay,
And Leader's flag has left the mast,
Then, and then only, shall you say
'The Age of Innocence is past!'

THE LADY OF SHALOTT (waking).
Not bad for a beginner, little Dicksee, but—don't do it again!