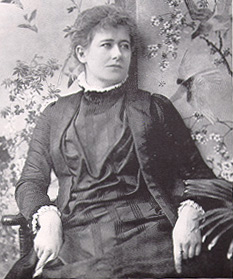 "Ellen Terry is the most beautiful name in the world; it rings like a chime through the last quarter of the nineteenth century," George Bernard Shaw wrote of the Dame when she was at the height of her career (Manvell, 329). This career did in fact span a lifetime; the child of actors, she was given her first professional role at the age of eight and performed throughout her life until her death in 1928. Her legacy was almost predetermined as she was the product of two actors who had already made a reputation for the name Terry. That legacy was passed on to her older sister Kate, and in fact it continued into the modern age after Terry's death through her nephew, the famed actor Sir John Gielgud. If the role of King Arthur extended past the curtain to represent Henry Irving's place in the hierarchy of English theater at the turn of the century, Ellen Terry was most certainly his Guinevere, the Queen of Britain's stage.
On the 27th of February 1848, in a small actor's lodging in Coventry, Ellen Terry was born. Ellen was the third child to be born to Ben and Sarah Terry of an eventual eleven, but one of Ellen's older siblings had already died in infancy so she was the second oldest behind her sister Kate (Terry, 6). Ben Terry had performed as a stock actor with Macready in Scotland and had already become an accomplished actor at the time Ellen was born. Likewise, Sarah had made a name for herself, so the young Terry spent all of her time traveling around with her parents as their careers directed them. Though professional actors, they did not have enough money to put either Ellen or her sister Kate through school (Manvell, 5); instead, their parents took to teaching them the trade of acting at a very early age because as Terry asserts in her own autobiography: "in those days theatrical folk did not imagine that their children could do anything but follow their parents' profession" (Terry, 3).
In 1856, Ellen received her first role at the age of eight playing Mamillius in Shakespeare's A Winter's Tale. Though a young child, Terry understood the importance of this role: "a real Shakespeare part—a possession that father taught me to respect with the utmost dignity!" (Terry, 13). The actor-manager who gave her the part was a man by the name of Charles Keans, who had already been employing Ellen's father for a few years and had cast Kate in numerous roles as well. Keans worked hand in hand with his wife on all of his projects and was in fact the bigger influence on Terry's early career. As a young actress, she was always taught the value of a clear speaking voice and was trained rather rigorously by her father who was himself a master of elocution. Terry reflects on the home training that both she and her sister received from their parents:

Kate and I had been trained almost from our birth for
the stage, and particularly in the important branch of clear
articulation. . . . They were both very fond of us and saw
our faults with the eyes of love, though they were unsparing
in their corrections." (Terry, 12)

The discipline that the actress learned though also came from a rigorous rehearsal schedule that the Keans required of all who worked in their theater. During her work in A Winter's Tale, Terry describes the work environment as follows:

"Rehearsals lasted all day, Sundays included, and when
there was no play running at night, until four or five the
next morning." (Terry, 13)

After opening on April 28, 1856, Terry performed her role of Mamillius every night without use of an understudy, for one hundred and two nights. The Times review of her performance stated that she was "vivacious and precocious, a worthy relative of her sister Kate" (Terry, 15). While a youngster working for Keans, she undertook quite a few more roles including tackling the character of Puck from Shakespeare's A Midsummer Night's Dream. She recalls a funny moment during one performance when she scampered out of a trap door in the stage to deliver the closing lines of the play and got her toe stuck when the stagehand closed the door. She began to wail, but was motivated by both her sister (who was the understudy for Titania that evening) and Mrs. Keans (who offered to double her salary should she finish the performance) to complete the speech through her sobs (Terry, 17). Her dedication and perseverance as an actress were apparent at an early age, and as Ellen Terry grew and matured into one of Britain's leading ladies, her success was inevitable.
In her book Terry describes how during that very performance in which Ellen caught her toe in the stage, apparently "a young man with dark hair and a white face rushed forward from the crowd and said: 'Never mind, darling. Don't cry! One day you will be queen of the stage'" (Terry, 73). The story says that the man was actually Henry Irving though Terry herself said that she did not believe she met him until 1867 when she played Katherine opposite his Petruchio in Garrick's Taming of the Shrew. Though she admits that neither of them thought much of the other during this first encounter, she recalls that, in retrospect, Irving's dedication to his art was very evident:

"His fierce and indomitable will showed itself in his
application to his work . . . . I learned from watching him that
to do work well, the artist must spend his life in incessant
labour, and deny himself everything for that purpose." (Terry, 74)

Nevertheless, Terry was disappointed with the state of her acting after this performance with Irving, and within a few months she decided to leave the theater for what would be a six-year hiatus, during which she chose to raise her family and concentrate on her homelife.
In 1876, Terry had made her way back to the London stage in a play called Olivia, which W. G. Wills (author of the unproduced version of King Arthur) had been commissioned to write for John Hare's Court Theatre. During the course of this production, Henry Irving became the owner of the Lyceum Theatre, and following her successful portrayal of Olivia, she received a letter from Irving himself inviting her to join his company. In November of 1878, she joined the company and started rehearsing for her role as Ophelia opposite Irving's Hamlet. Terry vividly recalls this first role she undertook at the Lyceum due to the amount of work and research that Irving required of her immediately after starting. She went to the insane asylum to study for her mad-scene but found that in fact all of the lunatics were, "too theatrical to teach [her] anything" (Terry, 154). This brought her to a conclusion about acting:

"It is no good observing life and bringing the result to the
stage without selection, without a definite idea. The idea
must come first, the realism afterwards" (Terry, 155).

In another episode, she was arguing with Irving about the costumes that she had chosen for her particular scenes. The controversy arose when she explained her intention to wear a black dress during the mad-scene. Though Irving only questioned her innocently that afternoon—"They generally wear white, don't they?"—the next afternoon, a horrified advisor of Irving's who had witnessed the discussion said to Ellen, "My God! Madam, there must be only one black figure in this play, and that's Hamlet!" (Terry, 157). Terry was embarrassed by her blunder, but Irving's patience led her to a conclusion that she held throughout her tenure at the Lyceum: "Although I knew more art and archaeology in dress than he did, he had a finer sense of what was right for the scene" (Terry, 157). Terry recalls that Irving constantly held his work and the work of everyone else in his company to a continually rising standard, so it is no wonder that by 1895 when King Arthur opened, the performances of Irving as Arthur and Terry as Guinevere were praised both in England and America.
It was well known by the early 1900's that a rather extensive correspondence taking place between Ellen Terry and George Bernard Shaw, but in 1895 when Shaw reviewed J. Comyns Carr's play, his admiration for Terry was still rather new. He begins his section on Terry's performance by saying:

"As to Miss Ellen Terry, it was the old story, born actress
of real women's parts condemned to figure as a mere
artist's model in costume plays which from the woman's
point of view, are foolish flatteries written by gentlemen
for gentlemen." (Shaw, 94) 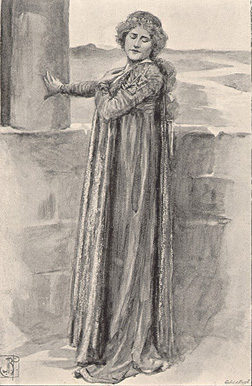 His review continues to explain how Carr's limp and uninteresting prose is a "heartless waste of an exquisite talent" when performed by Terry. He describes her performance as bringing certain lines "to perfection, but often with a parting caress that brings it beyond that for an instant" (Shaw, 94). In Clement Scott's article about Terry, he describes the actress in terms of other characters in the Arthurian narrative not necessarily included in Carr's drama to show how her mature acting has embodied the female spirit of the Arthurian legends:

"We saw her play Queen Guinevere; but at this period she was 'Elaine the fair, Elaine the loveable, Elaine the lily maid of Astolot.' She was Vivien with her mad girlish uproars. She might have sat for Rapunzel in that earliest book of Morris' The Defense of Guinevere " (Scott, 18).

Other critics also applauded the emotion that Terry provided on stage. The reviewer for the Athenaeum, for example, wrote, "The scenes of love-making between Lancelot and Guinevere are sentimental and idyllic . . . they are rendered with admirable delicacy by Miss Terry, and Mr. Forbes Robertson" (Athenæum, 93). Though clearly not her most memorable role (as her portrayal of Guinevere is not even mentioned in her autobiography), Terry undertook the role of the Queen with the dedication that she always had for the theater and created a wonderful counterpart to Irving's Arthur.
After King Arthur, Terry continued to act with Irving for many years, and her daughter Edy soon became a regular actress as well (Edy actually served as a double for her mother during the prologue of King Arthur (Manvell, 304). Her talent took her far even as a more elderly actress, and Terry even ended up on the Silver Screen late in her career (Manvell, 321). Unfortunately, in 1928, Ellen Terry's life came to a close. She had a stroke, and on July 21 she was pronounced dead. Before she died, Ellen had made it clear that she wanted "no funeral gloom," so instead they brought her body back to London where it was to be cremated and left in the actors' church, St. Pauls' in Covent Garden (Manvell, 329). In his biography of Terry, Roger Manvell writes that people lined the sixty miles of road to London, leaving bouquets of flowers for Britain's Queen of the Stage. England and the world had lost a star of the theater, but her impact on the profession and the performances she gave to the public will forever be remembered.
Bibliography