Canterbury Tales of Geoffrey Chaucer, The 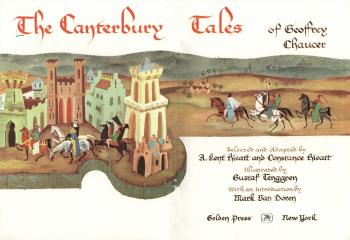 The Canterbury Tales of Geoffrey Chaucer

Text(s)
Tenggren's images are notable for their bright colors and their attention to setting.  While the title page shows knights riding to a castle, as one example, Constance's boat is drawn in detail in the retelling of the Man of Law's Tale.  The book also features pilgrim portraits in the inside front and back covers: each pilgrim appears in a solid-colored rectangle, and they are closely modeled after their character descriptions.  (The Miller, for example, is shown with his bagpipe, and the bright color and casual stance of the Squire compared to the more square and grounded knight throw their character differences into relief.)