How Four Queens Found Sir Lancelot in the Wood 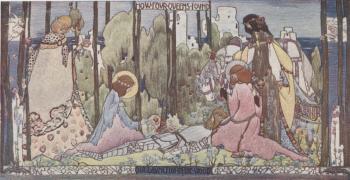 How Four Queens Found Sir Lancelot in the Wood

Additional Information:
This image is of an embroidered panel featuring the scene from Arthurian tradition where the four queens — including, according to Thomas Malory's account, Morgan le Fay, the queen of North Galys, the queen of Estlonde, and the queen of the Oute Iles — happen upon the sleeping Lancelot in the forest. Often, they abduct him and attempt to make him choose a lover from among the four of them. The panel was designed by Jessie M. King, and the embroidery work was done by Mme. E. Prioleau.